I'm fortunate enough to have the 'problem' of having to decide which of the two most sought after 100's I should run this coming summer.


Many people are thinking, what problem?  Just run both.  Others might say, "States is the oldest, most competitive 100, how could you pass that up?"  Others, "Hardrock is the hardest to get into, you could try to win your way into States again via a Montrail Cup race."


A lot of people quickly point out that many people have done WS and HR back to back.  Nick Clark even got 3rd at each event back to back.  I kept thinking, yeah, but he had more time to recover between the two races, there are only 13 days between the two races this year.  No one has done them that close together...  Then I chat with AJW who corrected me, and talked about his running of both in '09 when only 13 days separated them.  And of course he did very well and it wasn't that big of a deal (for him).

I'm leaning towards 'running' Hardrock, and only Hardrock.  Sure, part of me REALLY wants to run my ass off at States, see if I can crack top ten.  Running with that caliber of athletes is very inspiring, and the buzz of the event is something I long to experience.  BUT, Hardrock is more my type of race.  I love rugged mountains.  I grew up in the Sierra Nevada's of Northern California.  Racing in them at States would be special, but after visiting the San Juan's of Colorado at Hardrock last summer I haven't been able to stop thinking about the race and the giant scale of everything out there.

I would hate to run States, then show up at Hardrock, only to DNF.  Sure,  I might slowly slog my way to the finish line.  I don't want to risk dropping out of Hardrock.  Right now, a solid effort at HR is more important that a solid effort at WS.  It wouldn't feel right to not give that race 100%.

Furthermore, I have other, more important things going on in my life.  One of my best friends is getting married the weekend between the two races and I am honored to be one of his groomsmen.  I am contemplating going back to school to earn a Master's in the Science of Nursing.  Doing both races could easily put a strain on more important things in my life.  I love running in the mountains, but it is a hobby.  Maybe a hobby that gets a little out of control at times, but it's just a hobby and means to keeping me in decent shape.

What do you think I should do?

After being selected for both races via lottery, I did go out and buy a lottery ticket.  If I do win millions of dollars, I think I'll do both races.  I could buy an altitude tent, seriously focus on recovering.  Flights to and from races wouldn't be an issue for me, family and friends.  Other wise, I think I'll just stick to the race with the saw-tooth profile below: 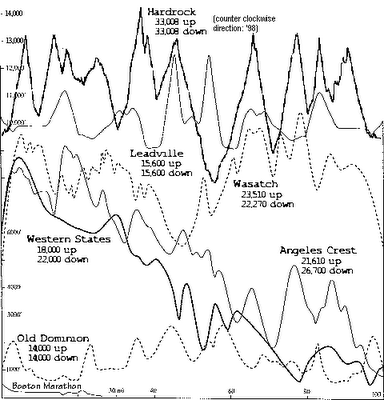