The weather was ideal for the race, 50's-60's with cloud cover.  I love how these shorter races I have run recently have a distinctly different 'race' feeling.  When running a 50 or 100 miler you can really let someone take off, and get way ahead of you.  No need to keep 'em in sight, you've got hours to reel them in - which is a fun, maybe more cerebral type of a race.  But in a race as short as 13 miles you really have to stay close if you want to be able to pass someone.  At the top of the climb that lead to the course's highest point, the races eventual winner, Scott Hambly, was a minute or so ahead of a group of four that I was in the middle of.  It's inspiring to chase someone 10 seconds in front of you, hear footsteps in your ears and see yet another runner 10 seconds behind him.  I like the way I have closed the final quarter of the race in most of my races.  I can't say that for my last two races - crumbling apart in CIM and Sean O'Brien was very frustrating.  As I pushed myself to keep the 2nd place runner from furthering his lead, and to keep the 2 runners behind me from catching me I thought to myself, "not this time." 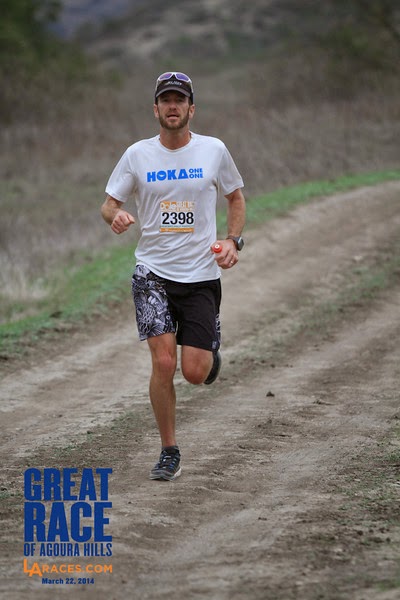 When we reached the peak of the course and began our 5 mile rolling decent to the finish I knew it was time to make my move.  I passed the 2nd place runner in front of me only to watch him pass me back on each an every little incline for the next couple miles.  Once we hit the pavement and had two steep miles to go I passed him for the final time, knowing that I should pass with authority in attempt to squish any thought in his head about him being able to pass me again.  And it worked, barely.  I definitely picked the right shoes to wear.  The Rapa Nui Tarmac's are my lightest Hoka's and yet they still had plenty of cushion to run fast, pounding down steep road or hard dirt.  Excellent shoe for this mix of smooth trail and asphalt.

Leading up to the race I was feeling fairly confident that I could run a 1:15 at this half.  I had been putting in some solid training since the Sean O'Brien 50 miler.  A lot of speedier stuff, hill repeats, etc.  I have recently started fine tuning my training by working with Sage Canady and Sandi Nypaver as coaches after checking out their VO2 max productions website.  I was feeling optimistic about the race.  A day before the race I woke up with a sore throat, but otherwise felt fine.  I kept denying that I was getting sick and ignored blatant symptoms that proved otherwise.  During my pre-race warm up I thought, hmm... I'm cold, clammy and light headed, but having a tiny cold wont really slow me down.

By mile 2 I felt tired.  I looked at my Garmin and realized I was running slower than I did during training runs earlier this week, even though I was pushing much harder now than I was then.  Darn.  For a split second I thought about scaling back a notch.  Why really push it if I can't run to my potential today?  Then I realized that I was only running 13 miles, and that I could still race for fun, and get some great training out of the day.  So I gave the race all I had and I would have regretted it if I hadn't.

This is the third race in a row that I've run and can't help but look back at my performance without a sense of frustration.  This is not to say that I didn't thoroughly enjoy each event.  Spending hours pushing myself to the limit, while feeling the love and support from friends and family, while supporting them as well is something that I cherish.  Last year I was more content with my running performances.  Part of me hopes that the rest of my races this year will be more fulfilling from a performance perspective, but I have realized that it is easier to dissect results I am less happy with than to critique a race where things went smoothly.  In other words, I am learning more from mistakes and misfortune.

While I ran MUCH slower  than I wanted to, a lot of things went well.  My hydration and nutrition plan worked well, I didn't have to frequent port-a-potties at all, and besides being sick, nothing was wrong with my body, i.e., strains, sprains, etc.  There are a lot of little things that have to happen to have a great race:  prudent training, smart eating the days leading to the race, being injury free, mental fortitude, not being sick, etc. etc.  We have a lot of control over much of that list but not all of it and there is a gigantic amount of ambiguity in each of those characteristics.

I was happy to pull off a 2nd place in 1:22 considering how I felt going into the race.  The post race festivities were great, as one might expect at the Great Race of Agoura.  Kids climbing a gigantic climbing wall, a band, hot pancakes off the grill, hanging out with friends like Keith and the Salingers - not bad way to spend a Saturday morning.

Alright, enough whining about the past.  Time to focus on the next race!

I love this race for a thousand reasons.  The technical trail, the crew of Arizonans that will be there, the beauty of the Mogollon Rim and the chance to run into Elk on the course (I had to stop to let three pass in front of me last year) are just a handful.  Naturally, since I love this course so much, I also love to train on similar type terrain.  I am stoked to abandon the asphalt and lose myself in some gnar.

This year will be special too.  A huge group of friends from  SoCal will be showing up to party. After getting lost for a couple miles last year I'm eager to see what I'm capable of without getting that lost, but as anyone who has run the course knows, it's pretty easy to get turned around out there.