Elissa and I caravanned over to Arizona with Dom and Katie the day before the race.  Stopped at the Four Peaks Brewery in Tempe for some lunch and a brewski with locals James Bonnet and Carol Tichio.  Good food, good beer, great company.  After refueling we slowly made our way out of the Phoeneix area's flat dry desert into the rugged forested mountains, some of which form the Mogollon Rim.  How is Mogollon pronounced you ask?  I don't know.  I get a different answer every time I ask someone.  Here's what Wikipedia says:  (pron.: /mʌɡɨˈjoʊn/ or /moʊɡəˈjoʊn/) or /mɒɡɒdʒɔːn/).  Got it?


We stopped by the Best Western in Payson to snag my bib.  Saw Joe Rowland laying out by the pool, working on his tan/showing off his pecks, sipping on some Bartles & James.  Saw a handful of friends and people I haven't seen since X # of races ago.

Elissa and I made our way up to Strawberry to check into the Windmill Inn.  Chose this establishment primarily because of its close proximity to the start line and the early start time the next morning.  Sign on the Inn's office door read, "check in at bar."  Looked down the street and walked into the bar.  Had myself a coke and waited for the Inn manager to show up.  Eventually she shows up, explains that our room's toilet overflowed and was out of commission.  Uh-ohhhhh.  "But don't worry," she proclaimed, "I got you a room down the street at the market."  Room at the market hunh? 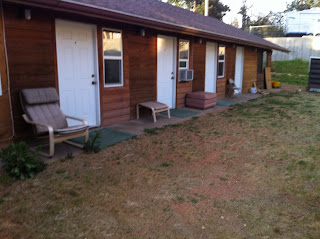 Bed was actually very comfortable, so I got a good night sleep, which important.  Towels smelled like cigarette smoke though, gross.  The man working at the market who checked us in told us, "you ought to just go camp out somewhere."  That's exactly what we would have done if we would have known that we were going to end up sleeping at the market, but we were without camping gear, oh well.

Made our way to the trail head for the 0500 start time.  Quite a few people were camped out there, made me appreciate that we chose not too.  I would have been too excited around all the people, noise and being at the start line.  Early start required using a headlamp for half an hour or so which is always fun.  My plan all along was to follow Jamil Coury (click that to read his ZG write up) or James Bonnett because they have both run this race, and I would be less likely to get lost if I were to follow them.

After the first mile or so Dom and I pulled ahead of the other guys around, being: James, Jamil, Mike Foote, Scott Jaime, Joe Rowland, Mike Carson and a bunch of other peeps.  I was running in auto-pilot mode/cruise control and running slower would just get me to the finish slower.  Didn't feel like the pace we were running at was going to keep me from running hard 40+ miles from now, so I took the lead for the next 20 miles or so, intermittently hearing my stalkers only a minute or two behind the whole time.  Every once in a while I would think to myself, "I'm glad there aren't any rabbits here today - sprinting off the start line... wait a minute, am I a dumb rabbit?  Nah, this pace is sustainable."

Then the well-paced dumb rabbit missed a turn.  Got onto the Myrtle Trail, went up 1,000' in a mile.

From the top of the rim I yelled:

Realizing I was off course, I came back a mile to the trail.  After getting home and geeking out on my Garmin data I figured out that I was off course for 33 minutes.  Oops.  Went from 1st to 11th.  BUT, I got to check out the rim, which no other runners did this year (Joe Grant took the same detour in 2011 but ripped his shoe apart in the process).  I got to stop and check out some hug elk crossing the trail right in front of me because of my mishap, and I got to run with more people, so it wasn't all bad.  I was pretty down though when I realized what happened.  I knew going into this race that a lot of people get off course here, but it was frustrating since I trained hard for it, was feeling healthy, and the slow running, technical terrain suites my abilities.

The first person I ran into was Brad Harris, we both ran Old Goats 50M a month or so ago.  His good attitude helped me keep going, thanks Brad, and congrats on holding on for a solid finish.  Unfortunately, after seeing Brad I ran out of water, then gels.  Finally got to the Fish Hatchery AS at mile 33.  I felt bad because Elissa was crewing me all day and I knew she had been waiting around for me, knowing that I was due an hour before I got there.  She helped revive me a bit and kept me focused on running forward and not dwelling too much on my "bonus miles."  It was nice seeing another friendly face and Pasadenan (sp?) Kristen Farley, there to push me out of the aid station.

Threw on my pack for the upcoming 11mile section.  I gradually regained strength as I got fluids and calories back into me and came back to life.  I enjoyed the rest of the course, feeling better now and just soaking up the nice terrain, moderate temperature and friendly faces along the way.

Good times were had at the finish line, gorging on food, sipping on frosty beverages, cheering on friends as they finished, sharing trail tales with old and new friends.

Congrats to James Bonnett for winning in a speedy time of 8:40.  Foote came in second, just a couple minutes in front of Jamil.  Kerrie Bruxvoort won in a solid time of 10:03, followed by Diana Finkel, then Sara McCloskey.  Full results here.

The Zane Grey 50M course is probably my favorite course.  It's beauty, ruggedness and rocky terrain were incredible.  Just might have to come back and try to run it without getting lost some day.