0500 start, running a mile or two on pavement through the beautiful mountain town of Wrightwood, en route to the Acorn Trail.  In the first mile I realized that it was already warm and I was already sweating, a sign of things to come.  5 of us were in a little lead pack: Jorge Pacheco, Ruperto Romero, Raphael Arceo, Robert Whited and myself.  The four of us were a little insecure running with Robert and all his muscles (and of course he had his shirt off already) so we ditched him near the Acorn Trail trail head and we hung pretty close together as we ran/hiked up the steady incline, clicking our headlamps off as the sun began to rise.  Raphael was in the lead, hiking like a mad man, as we crested the ridge and jumped onto the Pacific Crest Trail.

I was excited to finally have some flatter dirt where I could speed up my leg turnover and open up my stride a bit.  Jorge, Ruperto and I pulled ahead of Raphael slightly and the three of us leap-frogged through Inspiration Point to Vincent Gap at mile 13.

Ruperto and Jorge were a minute or two ahead of me at Vincent Gap.  I made sure to drink a lot of water in the miles before VG and chugged a little water in the aid station because I knew the 12 miles to the next aid station were going to be a little slow and my plan was to run with 2 hand held bottles today, no pack.

I kept reminding myself of all that I've heard about the big climbs early in this race:  Tommy Nielsen, Scott Jurek, Ben Hian, Keira Henninger and other ultrarunning rockstars all preached the importance of taking it easy on these early climbs.  So as exciting as it was, to be janging with Jorge up in front, I hiked a lot more than I wanted to, ran less and tried to remain patient.  After passing Ruperto half way up the climb, I was surprised when I looked up 3/4 of the way up the climb and saw Jorge 10 yards in front of me.  We passed photgrapher Larry Gassan as he shot away and began the rolling descent to Islip Saddle.  Jorge would pull ahead of me a little on the climbs and I would catch up on the descents.  "Glad the course ends going downhill," I thought to myself.

We strolled into Islip together and I was greeted again by my awesome crew of Elissa and Andy, handing me my bottle of Chocolate FLUID Recovery and throwing a wet ice cold towel on my shoulders.  I heard that Jim O'brien drank protein drinks every 25 miles when he set the course record back in '89, I like my FLUID Recovery, so I followed suit and it worked out very well for me.  I weighed in at 159lbs, a couple down from the pre-race weight, but nothing to be concerned about.  Threw on my new Rudy Project Zyon sunglasses, left the aid station a couple steps ahead of Jorge and was surprised when he stayed behind me the whole climb up Williamson as we hiked nearly every step.  Passed my buddy Jayme who was out catching amazing photos of the race, as he always does.  I stopped to water a tree and Jorge took the lead down to Eagle's Roost Aid Station.

I drank up at this aid station, think I even downed a little coke as I prepared for the drop into the dreaded Cooper Canyon and it's stagnant hot temperatures.  As I ran this two mile stretch of the Angeles Crest Hwy towards Buckhorn Campground and the Burkhart trail, Dom Grossman drove by, pulled over and told me that Jorge was a minute ahead.  Made it through the CG, crossed the creek at the bottom and slowly made my way up the incline to Cloudburst aid station.  The climb isn't that steep, but it is very exposed and hot.  I alternated frequently between running and hiking, and was surprised to catch back up with Jorge while I was hiking. He was hiking as well so I stayed with him for awhile until he pulled of the trail and let me pass. I was excited to be taking the lead again at mile 36, but I knew the race was far from over.  I was feeling great, but that doesn't mean much when you've got 2/3 of the race to go.

After the hot climb out of Cooper Canyon, the gradual decline to Three Points aid station was a welcome change.  Cruised into Three Points, Elissa hooked me up with coke, watermelon, cold/wet towel and I was off again. 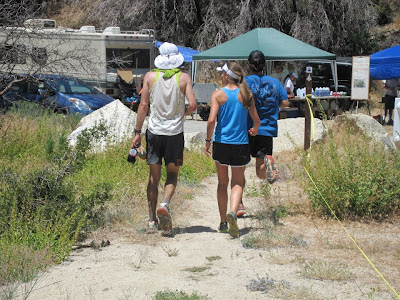 Had fun on this curvy/rolly section of trail, turned off onto the PCT and made my way towards Sulfur Springs CG.  Yes, it was toasty, but my silly hat and fluid guzzling abilities kept me from boiling over.  Ran into photographer Jayme Burtis again: 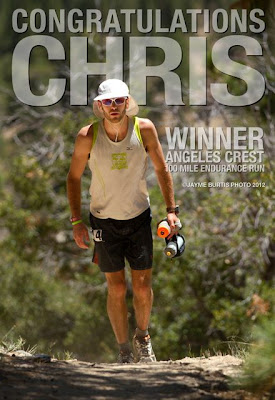 Ran up the hot, paved 2 mile climb to the Mt. Hillyer aid station.  Inhaled some watermelon, chatted with Dom Grossman a bit and was on my way.  Loved running through all the boulders en route to the Chilao aid staion.  The twisty and rocky terrain woke me up a bit and got me pumped up. 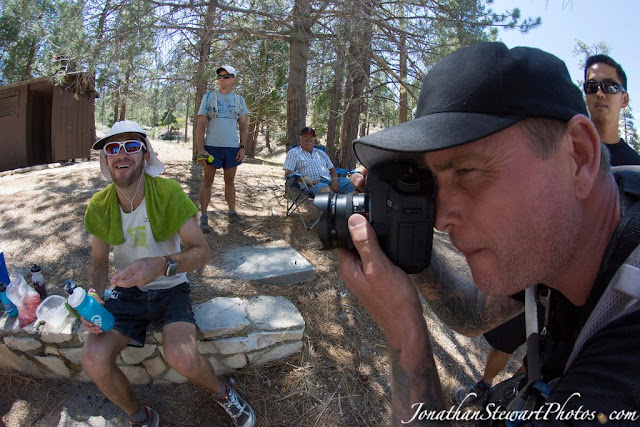 My crew loaded me up with watermelon, FLUID Recovery, new bottles, etc. at Chilao CG, mile 52.  I enjoyed resting for a minute or two, receiving encouragement from lots of friends.  I tried to laugh off the paparazzi, but it got a little overwhelming when Jonathon Stewart took a picture of Billy Yang filming Jayme Burtis taking a picture of me.  My first pacer Eric Wickland came to my rescue, pulling me out of there towards Shortcut aid station.

After running by myself for 52 miles, having a buddy now was a nice change, especially since it was Wickland filling me in on his stellar performance at Western States and his latest shenanigans.  Got to West Fork of the San Gabriel River and I jumped right in, water felt great.  Then the slog began, hiked most of the way up to the Newcomb Saddle aid station, in the hot afternoon sun, baking on the fire road.  I was right on my splits, shooting for a sub 19hr finish until I met this climb.  The aid station people were extremely helpful, filled my bottles and dropped into the canyon towards Chantry Flats.  Once we got down by the water at the bottom of the canyon, the temperature finally dropped a bit and I sprung back to life, weaving back and forth over the creek like it was just another training day.  We hiked right back into the heat up the short paved road to the Chantry Flats parking lot.


Pounded another bottle of FLUID recovery and slowly left the aid station with my second and final pacer Andy Salinger.  I was lucky enough to have Andy crew all day and pace me last year at San Diego 100.  He generously volunteered to do the same this year.  We ran most of the trail until we got to Hogees and had to turn left up the Winter Creek trail.  Uggggggggggggggggh.  Prior to race day I was looking forward to getting to Chantry, thinking that the thick forest and setting sun would bring cool temperatures.  I was wrong, so wrong.  The air remained hot and still the entire 3 mile climb up to the Mt. Wilson Toll Rd.  My heart was racing and I felt like a baked potato.  My stomach wasn't wanting to work at all.  After turning my headlamp on at the top of the climb, I ripped open a Gu packet, looked at it, and puked.  I felt better after a couple minutes of puking and dry heaving.

We were welcomed by Trey Barnes and his Fleet Feet Encino staff at the fully stocked Idlehour aid station.  I sat for a minute as Andy mixed up a new bottle of Vitargo for me.  We dropped down into slightly cooler temperatures at the creek before starting the climb up to Sam Merrill aid station.

I was promptly admitted to the Sam Merrill aid station by an efficient medical staff of doctors and nurses, who administered PO fluids of water and red bull, fed me some melon and gel and discharged me down the upper Sam Merrill trail.  It felt so good to be running in my back yard at this point =)  Andy and I cruised into the final aid station at Millard CG.  I grabbed some more watermelon and we made our way towards the El Prieto Trail and the final 4 miles of the course.

I thoroughly enjoyed splashing through the creek repeatedly as we neared Alta Dena.  My feet loved running in my Drymax socks with Hoka - Bondi B's under foot, didn't take my shoes or socks off once during the race - definitely a good combo for a hot mountain hundred.  The dirt changed to pavement as we closed in on the final mile of the course.  Andy and I hit Lincoln St., ran into my buddy Jesse Haynes and we made the turn into the park.  Ran up the grass under the finish line and it was all over.
I don't remember the last time I saw so many friends and familiar faces all in one day.  And the fact that I saw all these friends while we were literally running around in the mountains created a very memorable day.  Can't thank my wife Elissa enough for all the support during my training and all the help crewing during the event.  She was extremely organized and helped me out tons in aid stations, but got me out quickly too.  I've got to thank Eric Wickland for pacing me through the heat, and Andy for crewing all day Saturday then running into early Sunday with me.  I'm blessed to have the family and friends that I have.

Even though I was a bit delirious after the race, it was pretty sweet to watch so many friends cross the finish line after such a grueling day or two on the trails.  Congratulations Keira Henninger (RD extraordinaire) for winning the woman's race and finishing well under 24 hours!!!!!!!!!!!!!!

And last but not least:  Thank you volunteers!  Your long hard hours of work made this weekend a special one for hundreds of runners, crew and pacers.