Elissa and I spent 5 days at Muir Beach with my parents, brother and his girlfriend Vanessa.  We ate plenty of good food, relaxed a lot, explored the negative tide - tide pools a bit, watched a breaching whale from our living room window.  Went for some hikes.  All in all, it was a great family vacation and the race was a small part of it.

Driving up to the dirt parking lot with Elissa the morning of the race, I still wasn't sure if the defending course record holder Dave Mackey was going to toe the line today.  I joking told Elissa, "keep your eyes out for Mackey,"  2 seconds later we saw him walk by in his Hoka One One shirt.  I was stoked to get to run with him, but knew that winning the race today would be a much harder task.

353 of us donned our headlamps and/or grabbed flashlights and took off in the dark at 5am in the dirt parking lot at Stinson Beach.  We made our way through the streets of town for a mile or two before hitting the dirt for a 2 mile climb up to Bolinas ridge.  There was a nice pack of ten or so of us, running up most of the climb, throwing in a little hiking here and there on the steeper sections.  As we neared the top I looked back and saw the huge full moon illuminating the Pacific Ocean.  Point Reyes was easy to see and below it on shore were two miles of hundreds of lights, slowing winding up the switchbacks of the trail I just ran, runners grinding up the incline.  As we reached the ridge and it leveled off Dave took the lead and I slipped in behind him, and Jesse Haynes behind me.  There were a handful of other guys behind us at this point, Owen from Alabama, a local Jonathan Gunderson, and I think a Tamalpais team runner.

We wove through grassy sidehill single track for a couple miles before ducking under the canopy of Redwoods.  Dave and I were running together through the Bolinas Ridge Aid Station at mile six and stayed together through the redwoods on top of the ridge.  Looking off the right side of the ridge the sun rose over the rolling coastal mountains and Kent Lake... absolutely gorgeous.  At mile 10 we turned off the ridge and descended towards HWY 1 and the Randall Aid Station.  I felt very comfortable cruising downhill and pulled 15 seconds ahead of Mackey as we made it to the aid station.  Elissa handed me a full bottle as I gave her my empty and headlamp and we were off to retrace our steps for 10 miles.

The day before the race my family and I hiked/ran around on the course a bit and I was so inspired by how brilliant green everything was that I had to wear my INKnBURN Lucky Charm's Shirt.

I knew my lead would be short lived because every short climb up until this point Mackey would pull ahead a little bit, then every decline I would catch up and sometimes pull ahead for a little.  He did quickly catch me and I hung with him back up to the top of the ridge and for a little while once we got there.  Then I let him creep ahead, but kept on seeing him just around the bend for the next couple miles.  I kept thinking about Ray Miller 50M and how I shot out off the gate and blew up at mile 14... wasn't going to let that happen today.  Before the race I was concerned about an out and back so early in the race with so many people.  Turned out that we were on the cushy duffy fire road when we all crossed paths and it was great cheering on so many friends and being cheered on in return.  There was plenty of room for people to be running both ways here.

The descent off the ridge to Stinson did not retrace the steps we took up to the ridge a couple hours earlier. Instead we took the damp, rooty, rocky Matt Davis Hiking Trail down to the aid station.  I love technical terrain like this and I think I made up a little time on Mackey as people at the AS informed me that he was 100 yards in front of me.  Did another bottle swap with Elissa, was cheered on by Mom, Danny and Vanessa, gave my dad a high five and took off.

After a hundred feet or so on the PCH we stepped off the asphalt onto the Dipsea Trail for a couple miles of steep, frequently staired climbing.  But it was mostly shaded so I was feeling good.  Made it to the top? of Cardiac Hill and descended down Deer Park Fire road to the Redwood Creek Trail, over a handful of old bouncy wooden bridges to Muir Beach.  I was greeted again by my family and friends, swapped bottles with Elissa and made way for Tennessee Valley.

I kept seeing Dave, about 3-4 minutes ahead.  My desire to catch him waned a bit as we ran for miles on exposed rolling fire road and the temperature kept rising.  It never got truly hot, but I perform better in the rain and cool temperatures.  Once it gets warmer than 70 I start melting.  It was unseasonably warm, the coastal breeze felt great when it was blowing.  Occasionally I'd enter a sheltered area of stagnant air, but these never lasted long.  I'VE GOT A LOT OF HEAT TRAINING TO DO BEFORE ANGELES CREST 100M!!!!!

Speaking of AC100, I made it to the TV AS and was greeted by the Queen of AC, good friend, and significant other of my buddy currently chasing me, Keira Henninger.  She pumped me up a bit, helped me through the AS, told me how "close" Mackey was and I took off.

Started out with more exposed warm climbing, then rolling trail, on the SCA trail and Coastal trails.  Snuck a little peak of the Golden Gate Bridge and dropped to the Bridge View AS, filled up my bottles and was on my way.

Still kind of in a funk, ever since the climb out of TV.  Not feeling terrible, just not a lot of energy and I had to keep reminding myself to pick it up, it's a race not a leisurely run.  As I ran past a non racing runner we exchanged a little small talk, both appreciating the breathtaking day and scenery, then as I passed him he said, "wait... isn't that your turn?"  I had run right past a left-hand turn.  I ran back to the turn, thanked him profusely and continued down an overgrown poison oak infested path, but it was a fun section nonetheless.

Arrived at Rodeo Beach, ran across it and looked jealously at the surfers bobbing in the cool ocean water ( I was still hot).  Did a fair bit of hiking up stairs as I made my way up past Battery Townsley.  Looked down on the beach and lagoon, no runners in site... might as well take it easy to the finish, or so I thought.  Later Jesse said he saw me here, I didn't see him though.

Made my way up and down steep pitches back to TV AS.  I realized that a lot of these steep declines were too steep to go fast down, and tiring since I had to use my muscles more than if I were cruising quickly down a gentle slope.  Keira helped me out at the aid station again.  I asked her how Jesse was doing, having no idea that he was probably 5 minutes behind me at this point. "Uh... good," she said, and I was off.

Gradually descended down Tennesse Valley road to the coastal trail where Elissa and I ran a bit the day before.

At mile 53 I was running out of a switchback and out of the corner of my eye saw a runner flying down the hill about half a mile behind me.  What?  Where'd he come from?  Couldn't be a racer.  Looked closer, saw he was wearing a bib, and that it was my friend Jesse Haynes.  This definitely sparked me to wake up a bit and pick up the pace.  Made it to Muir Beach to see my family again (thanks for taking tons of great pictures Vanessa)!  Elissa took care of my bottle, helped me out with fluids and I was off, the less I let Jesse see me the better.

Danny running into Muir Beach with me:

My friend and 50k speed demon, Chandra Farnham, ran out of Muir Beach with me for a minute to give me a little pep talk and techniquey things to focus on.  Thanks Chan-chan, it helped!

I kept up an honest effort, making my way back over the little bridges to the base of "Cardiac" and kept my momentum up the climb, peeking over my shoulder on the longer straight stretches hoping not to see Jesse.  Hit the top, jumped on the Dipsea trail and quickly yet carefully made my way down the steps.  At this point I knew Jesse probably couldn't catch me unless I fell, so I didn't.  Made it to the road to friends and family cheering and shortly after heard people cheering for Jesse.  Yikes!  Ran through the finish in 9:28:30, a mere 25 seconds ahead of Jesse, and 14 minutes behind Mackey. 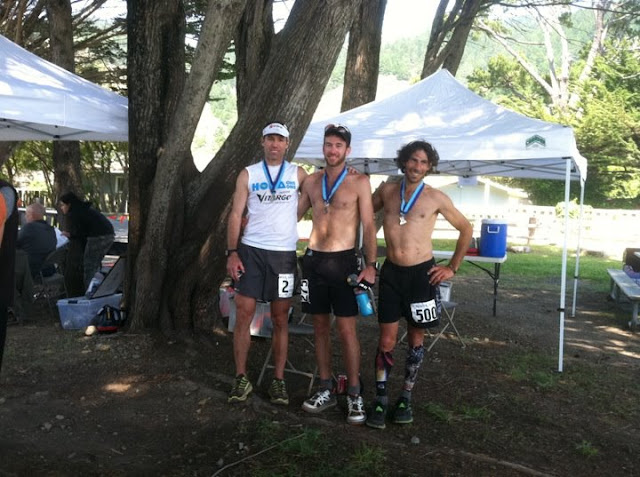 Nice video of the race by Jim Vernon: