First and foremost I've got to thank RD Steve Harvey for putting on a flawless event.  You can tell it ain't his first rodeo, and with the help of his wife, daughters and many volunteers they made it a great day for the hundreds of people racing and hanging out in the mountains.  I highly recommend running any of his races.

The clock counted down to 0 and we took off 20 minutes before sunrise, just light enough to see without headlamps/flashlights.  Fabrice, Jorge, Dom, Eric and I jumped out in the lead and stayed together, winding around the Bluejay Campground for a mile before reaching the San Juan trail.  For 5 miles the five of us stayed together on the gentle rocky downhill rolling single track.  Jorge, Dom and I pulled away from Fabrice and Eric right around when we veered onto the Chiquita trail.  Dom and I were laughing, hooting and hollering saying things like, "ah man, we're gonna have so much fun today," as we billy goated down the boulders.  Gee I started to have some GI feelings come up all of the sudden. 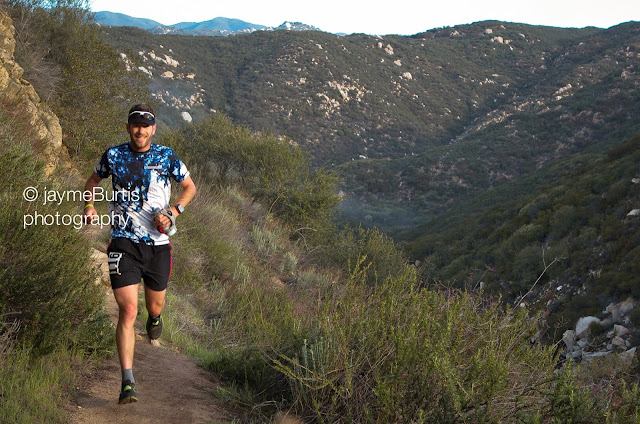 I pulled away from Dom and Jorge a couple miles before the first aid station so that I could hit up the port-a-potty without falling behind them.  Both stalls were occupied so I grabbed my handheld that a nice volunteer at the Candy Store AS topped off and decided to jump back on the trail with Jorge as Dom yelled, "come on guys, wait for me, guys...!"

The first mile after the AS was a flat mile that looped back onto the Chiquita trail, sending us back up the trail we just came down.  Jorge was running too fast for me to comfortable keep up at first, but I hung with him anyway. Luckily he slowed down a bit a mile later, but I was still feeling my hamstrings straining a bit.  I kept telling myself to let him go, but it was fun running with him so I hung on.  We both stopped for some water at the Chiquita Falls aid station.  He tried to let me take the lead but I declined, if I learned anything from running Ray Miller a month ago it is that I shouldn't go blazing trail early on.

As we reached the short stretch of asphalt in the campground leading us back to the start I told Jorge to have a nice race, that I had to stop at the toilet.  He said he thought he might too, what a relief, I won't be left behind... yet, I thought.  I ran past the aid station up to the toilet as Jorge took off on the Falcon trail, damn, there he goes.

I was peering around every turn of the steep Main Divide fire road, trying to spot Jorge.  I barely spotted him before he got to the Trabuco Trail AS.  They topped off my bottle, told me Jorge had 4 minutes on me and they yelled at me to get going already.

After running uphill for the last 12 miles I was really looking forward to these 5 miles of mostly rocky technical downhill.  I was surprised to see Jorge and pass him at mile 25, I knew he must not be his normal Campeon self today.

Lucky for me there was a nice big port-a-potty at the Holy Jim AS.  Then Bazz filled by bottle up,  Greg Hardesty offered some words of encouragement and inspiration in his bright pink outfit.  I slowly headed up the Holy Jim single track and remembered Fabrice and I were talking about this climb before the race started this morning.  I said, "yep, that climb is going to separate the men from the boys."  Yikes, I wasn't moving too fast up this gradual climb.  I pictured Fabrice passing me any minute, turning around and laughing at me.  I reached the Main Divide fire road where I THOUGHT the Bear Springs AS was going to be (this is where it was last year I was told).  Dude, no aid station?!  I have to climb up 3 miles to the peak without any water, uh oh.  Fortunately, the aid station was just a couple bends up the road.  I kindly asked the volunteers to throw rocks at Dom Grossman when he came through and I continued up the steep rocky road.  I drank a little too much water at the aid station and after swallowing a gel I felt like I was about to loose all that water.  I stopped running for 500 feet, my stomach corrected and I started to run again.  Saw a couple patches of snow as I neared the top, then you guessed it:  topped off my bottle and headed back down the 3 mile out and back.

Saw Dom with his nipples all taped up (I didn't know unicorns had nipples) about 9 minutes back from me, looking as strong and energetically goofy as ever.  Great, he can totally catch me, gotta keep pushing it.  A couple minutes later Fabrice, Jorge and Eric were all right together.  Dang, no cruising into the finish today, gotta push it all the way in if I want to stay in front of those guys.

Grabbed a bottle out of my drop bag as I passed through Bear Springs AS again.  It was pretty nice having so many well manned aid stations that I could get away with just having one bottle all day.  Thanks volunteers!!!

I kept popping my saltstick pills every 20-30 minutes, gulped down a gel every 30 minutes and maintained a controlled pace down Main Divide.  I think I got a little water from the Trabuco Peak and Horsetheif Trail AS's, ran past my buddy John Hockett (thanks for taking me out here for a course preview a month ago John).  Pushed up the last little climb to the Trabuco Trail AS, George Velasco gave me back my shirt that I left here on the way out and congratulated me as I cruised down towards the campground.  Saw my buddy and amazing photographer Jayme Burtis on the Falcon Trail just before the finish.  THANKS FOR ALL OF THESE GREAT PICTURES JAYME!!!!!!

Made it across the finish in 7:24 and got the 50 mile monkey off my back!  Up until this race I haven't been able to run a race longer than 50k without going out too fast and/or blowing up way too early.

It felt sooo good to pound my bottle of FLUID recovery drink, put my legs up, watch my friends Dom, Eric, Fabrice and Jorge, Tom, Michael, Kurt, Dan and others cross the finish line.  And who was going to be the first woman???!!!!!  I heard that the leaders were pretty close all day....  And Keira crosses the finish line sub 9 hours for the win! 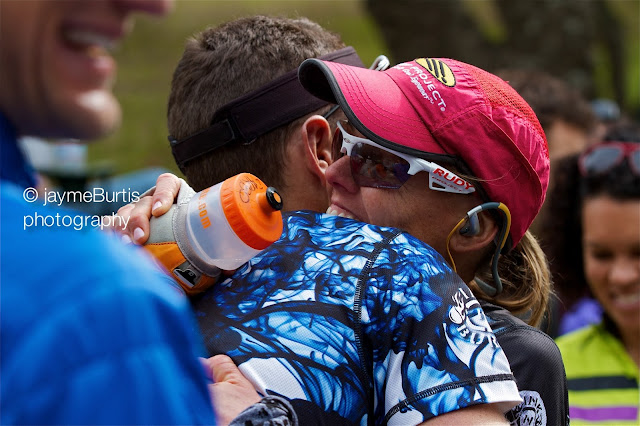 So stoked for her, after recovering from injuries she showed up and held it down for the Wolfpack.  I wasn't sure if she was back to her badass self yet, guess she is =)  Then six minutes later my friend Marianne trots across the finish of her first 50 mile race like it was nothing, she's soooo talented!  Maggie cruised in in 3rd, then my homie Katie Desplinter - proving that her knee is biggity back in action.  Tiffany and then Diana came through, wow.  So many friends throwing it down today! 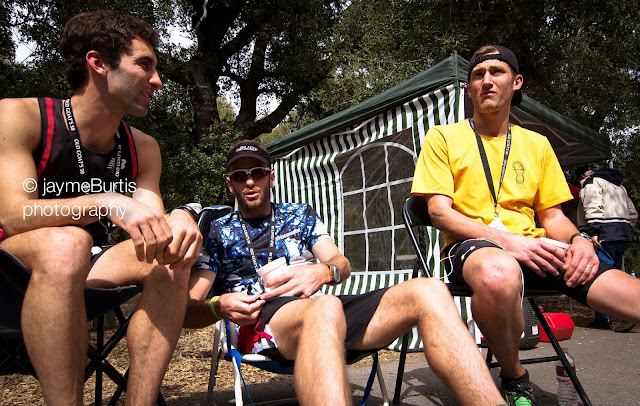 GEAR - from the ground up

Almost went with my LA Sportiva Electrons, but decided to wear my Brooks Pure Grit shoes, and I made the right choice.  They are super comfy and light, yet have a decent amount of cushion for pounding down rocky terrain and traction was never an issue.  They dried out quickly after running through a handful of creeks too.  My Drymax 1/4 crew trail running socks were perfect, no blisters, even with wet feet for half the race.  My INKnBURN "Zen" shorts were great, no chaffing or rubbing and the pockets in the front are super functional: one for saltsticks, one for gels.  My INKnBURN shirt kept me cool and dry the first 20 miles, then I ditched it and decided to soak up some sun until I ran back through the Trabuco Trail AS for the second time.  The Rydon Rudy Project sunglasses fit extremely well, and the photochromic lenses are very practical:  early on in the race the lenses are lighter, then when it got lighter and I was out on a sunny exposed fire road, the lenses get darker, love it.

My foot is in my mouth.  On the way home from the race, Eric Wickland sent me a text informing me that our Backbone Trail FKT just got demolished by Mark Hartell in 12:08.  Here's his report:  http://www.markhartell.blogspot.com/  Why is my foot in my mouth you ask?  A mere 4 months ago Eric and I set a new FKT and I foolishly stated that it would be years before it would be beaten.  Well, I guess there's nothing left to do but go run the BBT sub 12hr... or at least try =)
Posted by Chris Price at 2:15 PM