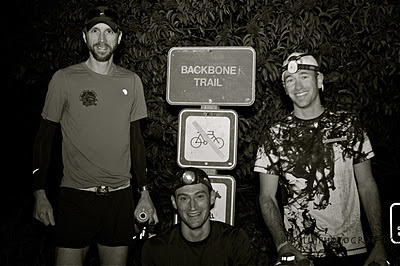 We met at Jayme’s pad in Woodland Hills at 4am.  He was generous enough to offer to crew us on our mission to set a new fastest known time on the Backbone Trail.  We loaded up his truck with all our gear and headed for the coast.  It was absolutely gorgeous, crystal clear skies, calm sea and bright full moon.
Eric Wickland, the wholesome Ohian Jay Smithberger and I started our run at the western end of the BBT, at the Ray Miller Trail just a couple minutes after 5am.  As we climbed out of the La Jolla Canyon up to the ridge we weren’t a mile from the start when a ground owl flew up between Eric and I, bumped into Eric and hovered a foot in front of my face blinded by the light of my headlamp.

As we continued out of the canyon we caught the beginning of the lunar eclipse and got to watch it until it was 90% eclipsed before we started our descent into Sycamore Canyon.  Once we reached the canyon floor there was frost on the grass, so stoked to have cool temperatures for this long fun run.  The sun started to rise as we started our biggest climb of the day up to Sandstone peak.  Half way up the climb we cleansed ourselves of our sins by slipping through butt rock.  Up at the top we made a little detour off the BBT up to the peak, stunning views.  Jayme met us up there and took some photos, can’t wait to see ‘em. 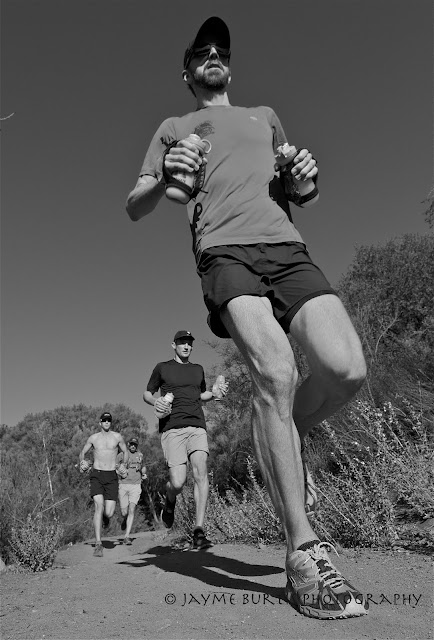 We cruised downhill aways, met up with Mr. Santa Monica Mtns., H’ard Cohen, and continued down to Mishe Mokwa.  Filled up bottles, ate a bit and continued on through a couple miles of rollers, then 5 miles down to Kanan Rd. where we were met by Jayme again, snagged a quick bite, refilled bottles and left for Malibu Creek State Park with a marathon under our belts.  Half an hour later Jayme rode out to meet us on his MTB and take some more pictures and let Eric and Jay know that they both made it into Western States!
Dropped onto the Bulldog Loop feeling good and were greeted by awe inspiring ocean views that never get old, no matter how many times I run up there.  I’ve got fond memories of this section of the trail, from running the Bulldog 50k a couple years ago and the Malibu Creek 50k last year.  We met up with my buddy Keith Yanov 5 miles out from Las Virgenes and quickly began a descent down a rock hard fire road that I tenderly remember as my least favorite part of the Bulldog race.  We reached the parking lot, grabbed a quick bite, refilled and headed out towards the longest climb of the day, 6 miles up Piuma.  I was surprised when the most veteran ultrarunner out of the three of us, with many fast 100s under his belt, started to slow a bit.  Jay was having stomach issues and decided to pull the plug at mile 50… either that or he couldn’t tolerate Eric & I’s juvenile/immature senses of humor any longer.  Either way the three of us had a great nine and a half hours together.  Can’t wait to see you tear it up at WS100 Jay! 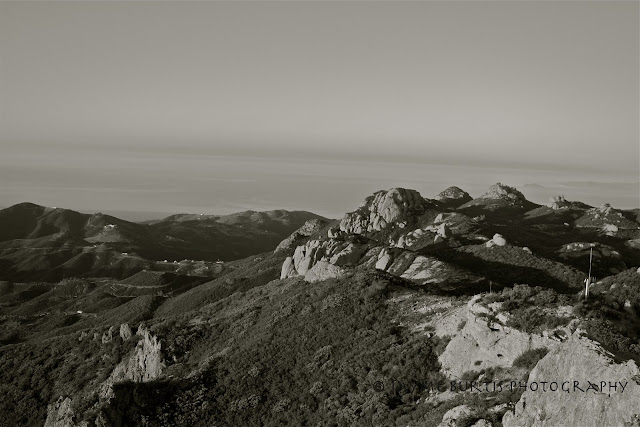 After crossing Stunt Rd. we cruised down five miles of playful, shady downhill to Topanga Canyon.  Realizing that there was less than a marathon to go gave me a little mental boost and knowing that the warmest part of the day was behind us made running seem even easier.

Made our way up the gentle climb into Topanga State Park, meandering through little meadows and eventually through the Musch Campground that Elissa and I spent a couple nights at last year.  When Elissa and I ran around here last year the trails were a bit overgrown and the poison oak was unavoidable.  Someone had put in some work between then and now as the trails were easy to enjoy without rubbing up on oak.  The whole trail in general wasn’t too overgrown with poison oak anywhere… but I’m sure I’ll still get some patches of rashes on my legs.  Pushed on up to Eagle Rock in time to look back and see the sun setting over the Tri-Peaks/Sandstone that we were climbing during the sunrise.  The dropping temperatures gave me a rockstar like energy boost, knowing that all of our climbing was over was a relief as well. 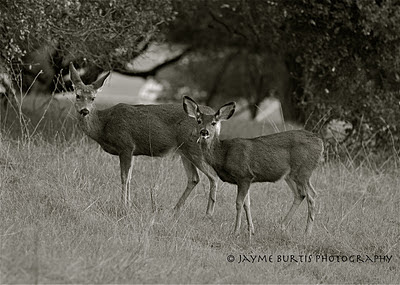 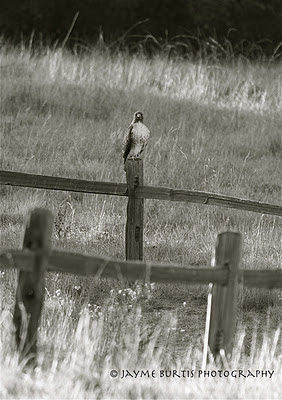 As the sun went down LA lit up and the twinkling lights outlined the gradually curving coast from Santa Monica out to Palos Verdes.  The last handful of miles were fun, rocky, somewhat overgrown technical miles that forced me to wake up a bit and focus since we were running with our headlamps at this point.  Petzl myo rxp headlamp worked flawlessly as per usual. 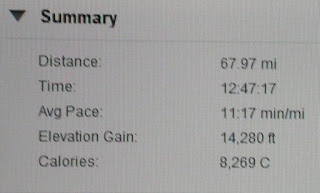 Made it to the end of the trail, then half a mile down to the parking lot where Jayme and Jay were waiting for us.  I was excited to be done with gels for a while as I inhaled a banana and pounded my bottle of FLUID recovery drink.  Also drank FLUID’s new performance drink during the run today, loved it.
Looking back at my equipment/clothing choices for today, things went pretty well.  Rudy Project Sportmask Sunglasses were put on (after the sunrise) and stayed put, didn’t have to adjust or keep sliding them back up nose, didn’t even notice they were on.  I knew my InkNburn shorts were good for a 50k, but didn’t know if they’d start chaffing further down the road, they didn’t at all, super comfy the entire run.  Pocket in front was perfect for holding ziplock of TP and saltsticks (took about 10 capsules).  My Drymax socks worked well of course, no blisters, even after running through a couple creeks and intentionally getting my feet wet.  I do think I chose the wrong shoes for today though.  I love my Inov-8 Rocklight 295s for technical trails/shale and mud, but they don’t have any cushion, and I really could have used some towards the end when we were pounding down the few miles of hard fireroad that makes up the BBT.  I should have worn my Cascadias, even if they’re a bit bulky.  I’m sure my feet would be feeling a bit better today if I did.  Eric was sporting the new Pure Grit’s and loved them.  I definitely want to try them out.  Need to get my feet into the New Balance 110’s as well as I search for the right shoe(s) for next year’s long races.
Thanks again for crewing for us Jayme.  Too bad that you’re on the DL and couldn’t run it with us this time, hope you heal quickly.

So how long will this BBT FKT of 12:47 last?  It’s not like 14k of climbing over 68 miles constitutes tons of climbing, and it’s not like the trail is crazy technical, but there is enough climbing and a lot of the trail is technical enough to slow you down a bit.  I think it will be at least a couple years until someone can crack it. It’s not that I don’t think the talent is out there, I know it is.  There are a handful of locals who are capable of breaking it.  BUT, it takes planning and knowledge of the trail to get it done efficiently.  Eric’s knowledge of the trail allowed us to run all day without stopping to look at maps and kept us from getting lost even for minute down the wrong trail.  Jayme’s familiarity with the trails also made our run 100x easier.  While I do like the idea of running the BBT unsupported sometime in the future, being able to run with handhelds instead of a pack, and not having to drive out the night before and stash food and water makes the run more about running and less about the less fun stuff.
Someday it’d be fun to run it in the opposite direction, as most people consider it the faster way to run it.  If you’re reading this, and you’re a fast cat... BRING IT!  I want someone to raise the bar.
Posted by Chris Price at 6:18 PM