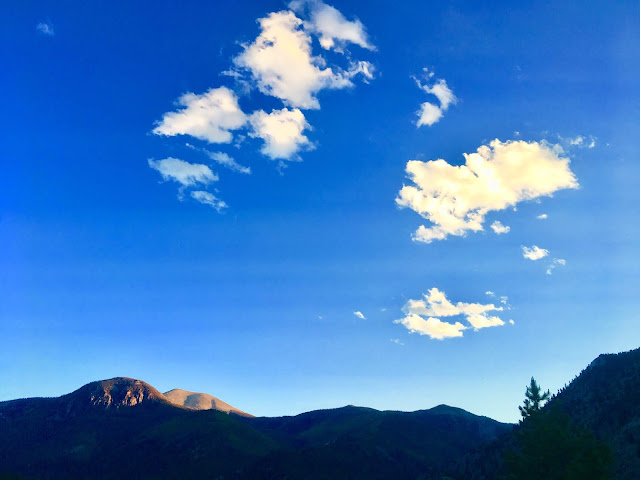 Leading up to the race I was cautiously optimistic about my level of fitness.  I was hoping to earn a spot on the podium, but knew that a handful of guys running the race were easily capable of the same.

5 AM came and we were off through town, along a couple miles of dirt road to the Alpine Gulch and the long slow climb up it.  We approached tree line and running into the first aid station, I frantically demanded grape soda or horchata, a volunteer cackled, gave me high five and bidded me adieu.  Dustin Simoens (2016 SJS champ) led our four pack which also included another guy from Gunny, Jesse Rickert (multiple top 3 finishes here), myself and Tyler Fox, whom was sporting his wife's Hawaiian shirt (for reals).  We were all giddy as we traversed alpine ridges and bowls, pointing out peaks, talking about skiing, animals, snow, flowers, fires and all things mountain.  Tyler and I pulled ahead a little and we cruised back into the trees, eventually arriving at the Williams Creek aid station (mile 16ish).

Before I knew it Dustin had caught back up and the three of us busted out our hike/run/hike skills on the 8 mile climb up to the Continental Divide.  Half way up we hit the Carson aid station and were joined by Jackson Brill (2018 Dirty 30 champ) and Carlos Ruibal (2nd place at SJS 2017).  For the rest of the race, another 28 miles, we were almost always within site of each other.  How cool is that?  Whereas in some ultras, you find yourself all by yourself for hours, which equates to horrible company when it's yours truly, instead, we all got to feed off the energy of the others and chat, share the experience of running along this 10 mile alpine section of the Continental Divide, soaking up the vast vistas, bugling at bull elk as then ran over the pass in front of us, and peering across the valley at the mountain we ran down 15 miles ago.

By mile 35ish Tyler had pulled away a tad off the front, I couldn't see him any more, I did still have Jackson in my sights 1 minute in front of me.  I couldn't drop Carlos behind me, but Dustin was just far enough behind him to be out of sight now.  We finally got to the steep descent which leads into the Slumgullion Earth Flow and its namesake aid station.  I run better downhill than I do on flats or uphill, so I knew it was now or never.  I caught Jackson at mile 37 and made sure to run hard for awhile to try and get out of his site as we were now winding down a jeep road through a forest of thick aspen and pine that could keep me out of his sight.  I reached the aid station at mile 40 in 2nd place, was cheered on and helped out by my daughter, Penny and wife, Elissa, whom informed me that Tyler left, "seconds ago." 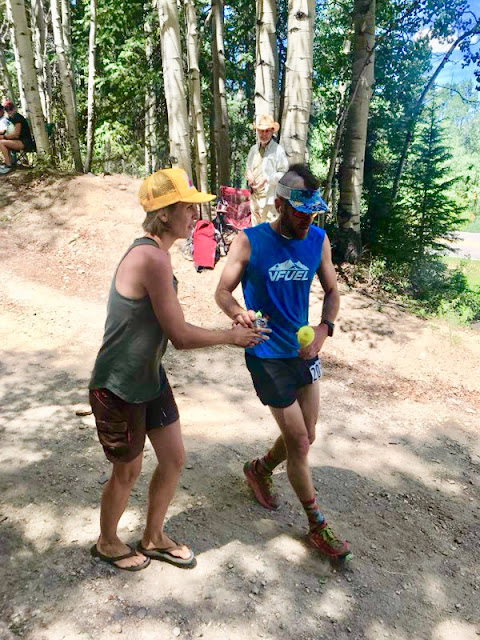 I hurried out of the aid, crossed the highway, scurried over the earth flow and set off in pursuit of Tyler.  It took a couple miles but he came into view half way up the 2 mile long, final climb of the race at mile 42.  He was swiftly clickity-clacking uphill with his wizard sticks.  I was attempting to run, but couldn't muster out more than a little shuffle as I slowly passed him on the trail overgrown by young quakies.  I didn't look back much, but learned after the race that Jackson was behind us on this climb and could see Tyler and I right in front of him and Carlos just behind.  A genuine barn burner.

I hammered the descents but felt cramps creeping into my muscles anytime the trail flattened out, ruh-roh.  I took an electrolyte pill but considering all the recent studies revolving around cramping and it not being an electrolyte issue, but rather a neuromuscular issue that seems to be alleviated by ingesting bitter things like mustard or pickle juice I grabbed the bitterest thing in front of me and started chewing, mmm... pine needles.  Seemed to work!  I also sucked some sweat of my arm hair for good measure.

Rolling into the final aid station, Vickers, I filled my bottle and skedaddled.  30 seconds later I hear the volunteers cheering for Tyler as he arrived, ahhhh!  Lucky for me, the next two and a half miles drop 2,000' so I let my quads do their thing and carry me down into town.  The last mile and a half to the finish line runs on the mostly dirt roads through town and it's all flat.  Felt like I was shuffling in quicksand and had to tone it way down to keep my muscles from seizing up.  After looking back 100 times for Tyler I finally arrived back to where we began the race earlier today.  Penny ran down the finish line chute with we me and we completed the loop course in 8:33.  Tyler finished 2 minutes later, and Jackson about 7 minutes behind him and Carlos only 2 minutes further back. 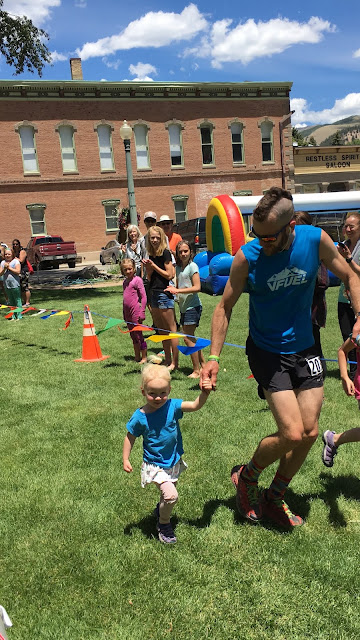 Thanks to the Race Director, Jerry, and all the volunteers for a stellar event!  Congrats to my buddy, Cory Meaker on his first 50 miler, way to get it done!

Next up: Ouray 50 Mile in late July

My Julbo sunglasses with photochromic lenses adjusted to the varying levels of brightness and protected my eyes on the windy divide.  And they are so comfy I totally forgot they were on.

I didn't have any blisters or hot spots after running 50 miles, including half a dozen creek crossings early on thanks to my Drymax Socks.