With the California International (road) Marathon a couple weeks out, I thought this would be a perfect race to jump into.  I've heard great things about it from people who've run in it the last couple years, I've yet to set foot in Griffith Park (crazy, I know) so I signed up.


8:30AM rolled around and we were off, straight up a nice hill.  I quickly fell a little behind the lead pack of last year's winner John Mering, Andres Diaz, Jesse Haynes and Sergio Arias.  I was dying trying to keep up, and eventually had to let them pull away a bit.  After climbing 500' in the first mile we got to head downhill for a bit and I caught everyone except the leader.  But as soon as we started uphill Andres would pass me.  I'd pass him again on the downhills and we continued to yo-yo like this for the first 6 miles.  At this point I caught up to John, but he pulled away as soon as we began climbing again and eventually kept about a minute lead on me the rest of the race.  Results here.

Before the race I was concerned that with 400 runners the out'n'back sections would get crowded and chaotic.  This wasn't the case at all.  The majority of the course was on smooth and wide dirt roads, and the volunteers at nearly every turn helped keep the race running smoothly.  The out and backs were fun because I got to see how friends behind me were doing, was able keep tabs on my buddy Jesse Haynes (who was close to catching me), and other runners and I got to cheer each other on.  My favorite out'n'back turn around aid station had to be at the observatory where I was handed a sports drink from this friendly guy: 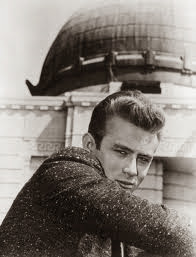 The views on the course were amazing.  The recent storm left the air crystal clear with stellar views of the Pacific Ocean, downtown LA, and the San Gabriel Mountains - including Mt. Baldy with a fresh blanket of snow.  I haven't run anything but ultras for years now, and wasn't expecting a whole lot from this race on trails in the heart of LA, but it was a very cool event.
﻿﻿﻿
﻿﻿

﻿﻿﻿With Keira Henninger running the show I knew everything would be marked extremely well, there would be a small army of friendly volunteers and there would be great stuff in the swag bag - a Patagonia Capiline T-shirt at this race, among a handful of other cool goodies.

Rudy Project Sunglasses and visor worked well on this bright and sunny day.

Ink'n'burn tank and shorts felt great, as per usual.

Hoka - The Stinson EVO's have been my go-to shoes for a long time now, and they worked flawlessly today.  I love reeling people in running full speed downhill in the 4-5 minute mile range and having my feet feel great.  In the past I've used them primarily for long runs, but with all my road marathon training I'm realizing that they are great for shorter distance and speed work as well.  I'm insanely stoked to announce that I recently joined the Hoka Team.  They make the best shoes and I am very proud to represent them.  I have recently stepped up my training and am eating healthier.  I'm looking forward to a breakthrough year.  Time to fly!

My Drymax Trail Lite socks always feel good and today was no exception.


It was very refreshing to mix it up a bit and run a shorter race.  My body seems to have responded well to the faster/shorter/flatter training that I've been doing lately.  I see quite a few of the Bay Area runners jumping into shorter races and it seems to work for them.  Jorge Maravilla for example, recently ran a 1:09 at the Berkeley Half Marathon, and we all know how talented he is.

I would love to jump right into another local shorter trail run, like one of the Paramount Ranch Trail Runs, but I'll be up in Sacramento running the California International Marathon that weekend - I'm not cool like Mike Wardian, so I'm not going to do both (he recently ran a marathon in San Antonio and Las Vegas in the same day).  After my road marathon when all I have on the horizon are ultras, I hope I'll still be able to talk myself into speed work and occasional shorter races.

We'll see if all this speed work I've been doing pays off come Sean O'Brien 50M, when all the big dogs come to town.