Wow, since last years race I totally forgot how tough this course is.  Unlike last year, this year was much warmer and less torrential downpoury.  While you were able to see the beautiful views this year, it was easier to run in the wet cold last year than in the moderate heat this year.

I was nervous toeing the line with quite a few fast cats, and when the race started I took off in the lead, probably a little faster than I should, just because it felt good.  One simple strategy I had going into the race was to get to the Los Pinos trail and its 8 miles of climbing before all the other guys, because they are better climbers than I, and I didn't want to try and keep up with them all the way up.  The idea of trying to keep up with Jorge on that climb, or catch up to him on that climb sounded improbable.  Like Noble Canyon, the first 1/3 of the race is rolling flats and downhill, super fun stuff.  So I enjoyed it and didn't worry to much about saving some gas in the tank for later.  Used one bottle for this section and it was more than enough in the cool shadey air.  Averaged a 6:36 pace up unto this point, now time to slow down A LOT.
Miles 12-22:
It was a relief to get to the Lazy W aid station before the other racers.  Threw on my 2L Nathan pack and took my time running on the short section of road to the Los Pinos Trail.  Ran the first couple miles then started to hike.  Looked back and saw Jesse Haynes looking very fresh.  Oh well, I thought, at least I'll get a little farther up the climb before he passes me.
I slowly kept plugging away at the climb, appreciating each little saddle and occasional short steep decline until I tripped at mile 17 and landed on a cut off stump.  I just layed there for a couple breaths as I assessed the situation.  Wow, one second I'm running downhill, the next I'm laying on the ground in a bush with a smashed thigh.  I walked it out for a minute, then was able to start running slowly again.  A couple miles later I stopped to pee.  I thought my leg was just crushed a bit but saw a nice little wound: 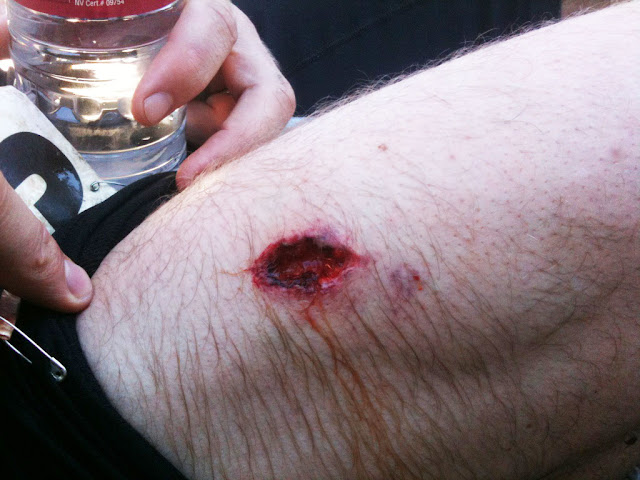 My leg was hurting a little bit, but not enough to really slow me down, so I kept going, slow and steady up the climb.  Where's Jesse by the way?  He couldn't possibly be going as slow as I'm going right now, I've got to see him, Jorge, Dom, Tom or Michelle any second.
I finally got to the top then descending on my way to the Trabuco Aid station, passing by Carl Tedesco who was working the aid station and had run out to alert the rest of the station when we were coming through.  Thanks Carl!  Thanks to all of the other aid staion volunteers, your hard work is greatly appreciated, even when I'm too weak and confused to say so.
Miles 22-30:
It was refreshing to be done with that long, slow, hot climb.  The shade and downhill on the Trabuco Trail was just what my mind and body needed.  Then I got to the Horsetheif Trail and the fun and games were over.  Time to hike again, in the hot sun.  A couple weeks ago I ran the whole climb, no problem at all.  Today I walked the entire climb.  Near the top of the climb I looked back and saw Jesse, still just a couple minutes behind me and looking way better than I felt.  Well, at least I led the race for the first 26 or so, hopefully I'll still get 2nd or 3rd.  Made it to the Horsetheif Aid Station and was stoked to see Dean Dobberteen as he filled my bottles with water.  Since it was warm and I was drinking a lot, all the sugar from my Gu brew was getting to me, should have diluted it a bit when I was making it.  Slowly kept running on the rolling, rugged Main Divide fire road, wishing Jesse would just pass me and get it over with.  Strolled into the Trabuco Aid station again and got a little water for the short descent back into the Bluejay Campground and the finish, which I crossed just a couple mintues before Jesse.

What a sick event!  Once again Keira put on a great race:  awesome aid stations, cool race shirt, unique medal, and tons of other swag, including some new Ink'n'burn shorts to replace my ripped ones:
﻿﻿ It felt great to sit down and be done with this race, forever!  Yes, this was the 2nd and final year of Los Pinos 50k.  I do think it suites me, technical steep stuff and not too much flat fast stuff that would let speedy people take off on.  Even so, I felt utterly misserable for most of the race it's nice to know that I won't be racing it again anytime in the near future.

I couldn't believe how many friends and running acquaintances were at the race!  It sucked to see so much carnage, Harald cutting his leg up much worse than mine and having to drop.  Katie getting sick and dropping, hope they both get healthy soon.

﻿ ﻿
I'd like to thank my sponsors: Drymax's Maximum Protection Trail Running socks held up flawlessly.  My FLUID recovery drink was the first thing I grabbed to drink after the race, and my new Rudy Project Sunglasses were super comfy and worked perfectly.